There are many things to love about San Francisco. From mouth-watering cuisines, Victorian house, the hills etc. Tourists planning to visit the city always wonder whether to drive or use public transport. The best advice would be not to drive around the city. It is hectic getting a parking slot and the traffic is a nightmare. Fortunately, San Francisco offers a wide range of public transport networks. They are efficient and affordable thus make it easy to commute in the city. They include cable cars, light trains, buses, and shared rides.

It is useful to locate a central and well-connected neighborhood when visiting San Francisco. It is going to make it easy to move around especially with the many good things you can do there. One good place to find accommodation would be around Fisherman’s Wharf or Union Square. Knowing which bus to take when you want to move around can be challenging at first. Make use of transit trip planner tools such as the 511 that can be used on any smartphone.

Muni refers to the city’s Municipal Transport Agency. It is the main agency for public transport in San Francisco, therefore most tourists visiting the city use it to move around. It is a vast network consisting of street-cars, buses, and cable cars. With the network, getting around the city is quick and easy. The agency also provides temporary passports to visitors ranging from a day to a week. The passports grant the traveler unlimited rides across the network of operators. These passports are a good option if you are planning to travel around a lot. The passports issued by Muni are valid only in the Muni transport system. They are not valid for other transport systems such as the rapid train or for airport transfer.

The rail network in San Francisco includes the Metro light rail system that makes up 7 lines. It is useful in connecting southern areas and downtown. The advantage with it is that the Muni passport is valid. The second option in the rail network is the Caltrain. This provides services between San Jose and San Francisco. The absence of tourist attraction features along its route makes many tourists avoid it. it might still be an exciting ride for those who don’t want the usual attractions.

The Bay Area Rapid Transit train (BART) is the most popular and main transport system in the bay area. It has an expansive network connecting Oakland, Walnut Creek, Berkley, Peninsula, and other cities. It delivers fast services between downtown and mission district as well as Oracle Arena. Below is a map of BART’s train lines. 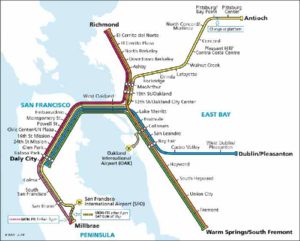 Being a city on the ocean, you cannot miss ferry transport. There are various ferry lines offering other options for getting out of the city. Some ferries serve the main tourist points such as Sausalito while others operate to Tiburon, Vallejo, Angel Island, Oakland, and Alameda.